Skip to content
January 3, 2020Trade ChatUpdates 0
Today major indexes continued their recent trend of strength on the first trading day of 2020. DJIA, S&P 500, NASDAQ and Russell 2000 have all advanced four times in a row and DJIA has been up ten of the last twelve. S&P 500, NASDAQ and Russell 2000 have recorded gains in nine of the last twelve. Today’s gains put the Santa Claus Rally solidly into positive territory with one trading session remaining. However, over the past 21 years, not all positive January first trading days have translated into full-month gains. S&P 500 posted first trading day gains in 2002, 2003, 2009 and 2010 before reversing and ending January lower. January’s long-term track record of gains going back to 1950 turned noticeable weaker at the start of the century. Since 2000, S&P 500 has declined ten times in January. This recent weakness can be seen in the following January seasonal pattern chart. 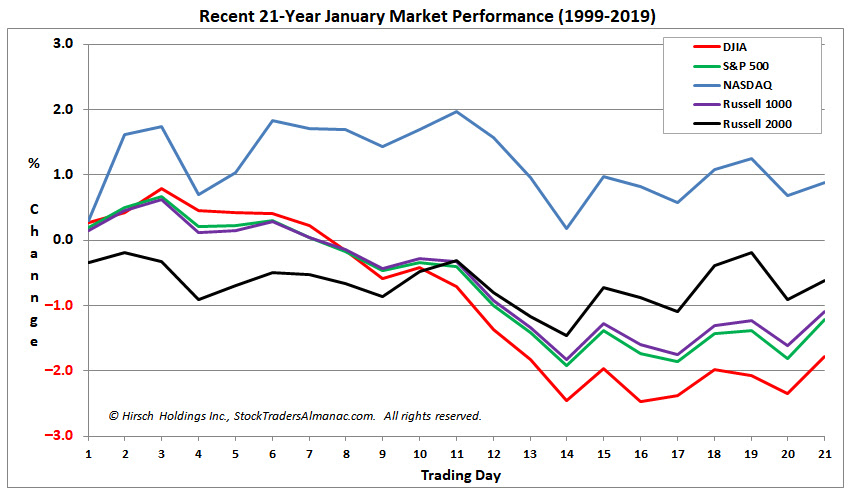 Over the last 21 years, Only NASDAQ has posted a full-month average gain. DJIA, S&P 500 and Russell 1000 have started January positive, only to surrender early-month gains by the eighth trading day. Greatest weakness has appeared just after mid-month, the eleventh trading day. Mild average losses on or around the eleventh trading day quickly swell to over 2% for DJIA and nearly as much for S&P 500 and Russell 1000.
Barring a reversal tomorrow, our first indicator of 2020, the Santa Claus Rally will turn in a positive reading. Today’s gains also give our First Five Days early warning indicator a comfortable head start towards a positive reading. Both of which do improve the odds of full-year gains, but do not guarantee that the year will not experience a few bumps along the way. Given January’s recent record of volatility, a more cautious stance seems prudent. When the January Barometer gives its reading at the end of the month, we will have additional clarity. Until that time, hold existing positions and limit new buying.
Stock Portfolio Update
In the time since last update through yesterday’s close the Almanac Investor Stock Portfolio climbed 2.8% higher compared to a 4.4% advance by S&P 500 and a 5.0% gain from the Russell 2000. The portfolio’s sizable cash position played a part in capping gains. A slow start for our Free Lunch stocks held overall Small-Cap gains in check, up just 0.4% since last update. The Mid-Cap and Large-Cap portions of the portfolio advanced over 6%.
Our October Stock Basket, released on October 17, has performed well. As of yesterday’s close, the October Basket was up on average 13.6% (including stopped positions) compared to an average gain of 7.9% by DJIA, S&P 500, NASDAQ and Russell 2000 over the same time period. Of the original 20 positions in the basket, 17 remain in the portfolio. Taylor Morrison (TMHC) was stopped out in November, Spirit Aerosys (SPR) was stopped out in mid-December and Celgene’s acquisition by Bristol-Myers (BMY) was completed on November 20.
Celgene shareholders received one share of BMY, $50 in cash and a Contingent Value Right (valued at $9.00) for each share of Celgene held. The new shares from this merger have been added to the Large-Cap portfolio using November 20 closing price. The CVR is listed and trades at the NYSE under BMY/R. More complete information about the merger, tax consequences and the CVR can be found here (https://www.bms.com/investors/shareholder-services/shareholder-faq.html). Pricing information for the CVR can be found at nyse.com (https://www.nyse.com/quote/XNYS:BMYr).
Although the broad market and many of the positions in our portfolio enjoyed solid gains in December, three positions were stopped out. Enterprise Prod (EPD), Vistra Energy (VST) and Centerpoint Energy (CNP) have all been closed out of the Large-Cap portfolio. EPD and VST were closed out for modest single-digit losses while CNP took a 13.6% hit.
Free Lunch stocks selected from stocks making new 52-week lows on December 20 appear in the portfolio table below. All are shaded light grey for quick identification and all but Groupon (GRPN) are listed in the Small-Cap portfolio. As of December 31, the basket has gotten off to a slow start. Three positions have been stopped out; AKRX, ELGX and GALT. Three positions never traded within the suggested buy limit range and have run away; LEE, ANIX and ECOR. Paringa Resources (PNRL) was halted in Australia on December 23 and has not traded since. PNRL is cancelled. Highlights from the basket include Theratechnologies (THTX) and Energous Corp (WATT). THTX quietly climbed over 17% and WATT spiked on above average volume today.
As a reminder, Free Lunch is a short-term strategy for the nimblest of traders. Heed stop losses and don’t hesitate to take profits should a position jump higher. Free Lunch stocks are not long-term holdings and we think you should be out of all of these stocks sometime between mid-January and the middle of February, possibly sooner if they fail to move.
Please see table below for current advice, suggested stop losses and where applicable buy limits. 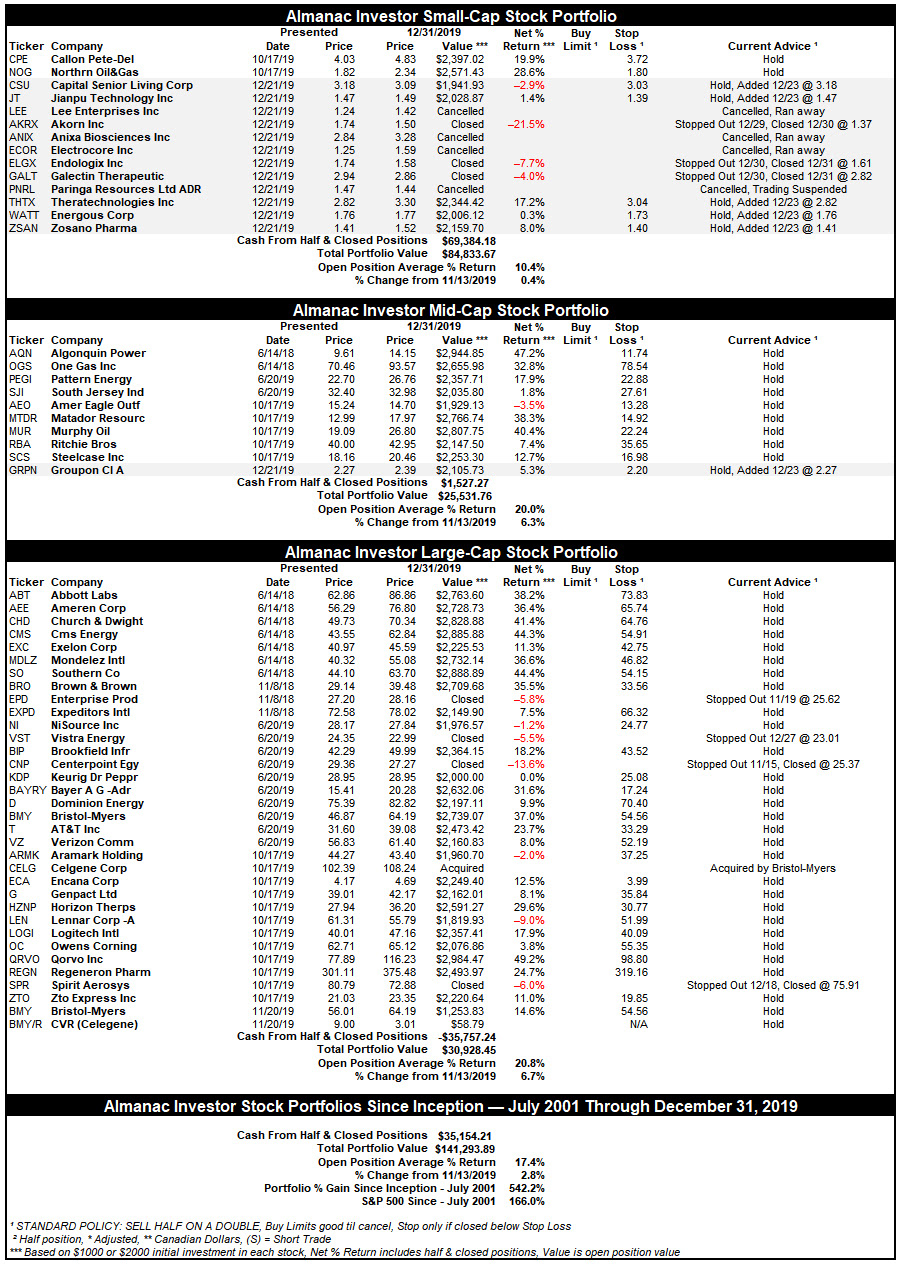